While 2020 was rife with stormy weather of one sort and another, we hope you also had many moments to appreciate. While contemplating your blessings, scan through your photos and see if there’s something you’d like to enter into PaNNTOA’s photo contest—the fast approaching deadline is November 30th.

Stay safe, stay warm, and in the great words of UNKNOWN, “There’s always something to be thankful for on Thanksgiving. Even if it’s just not being a turkey.”

Editor’s note: If you’ve been following the adventures of Miranda, you’ll know that she tours the seas aboard PaNNTOA members’ boats. Her adventures have been chronicled in a lovely album, updated for member’s enjoyment for each annual rendezvous. This year, we’re posting Miranda’s story on the web site for all to enjoy. Miranda recently returned to port following her journeys this year with Bill and Sam Stone aboard the good ship, July. Here’s Sam’s report:

Miranda arrived at our home in Anacortes on Monday, June 29th. I was out walking with the neighbors. She just made herself at home, insisting that she sit in Bill’s favorite chair until he returned. Kind of reminds me of our cat. 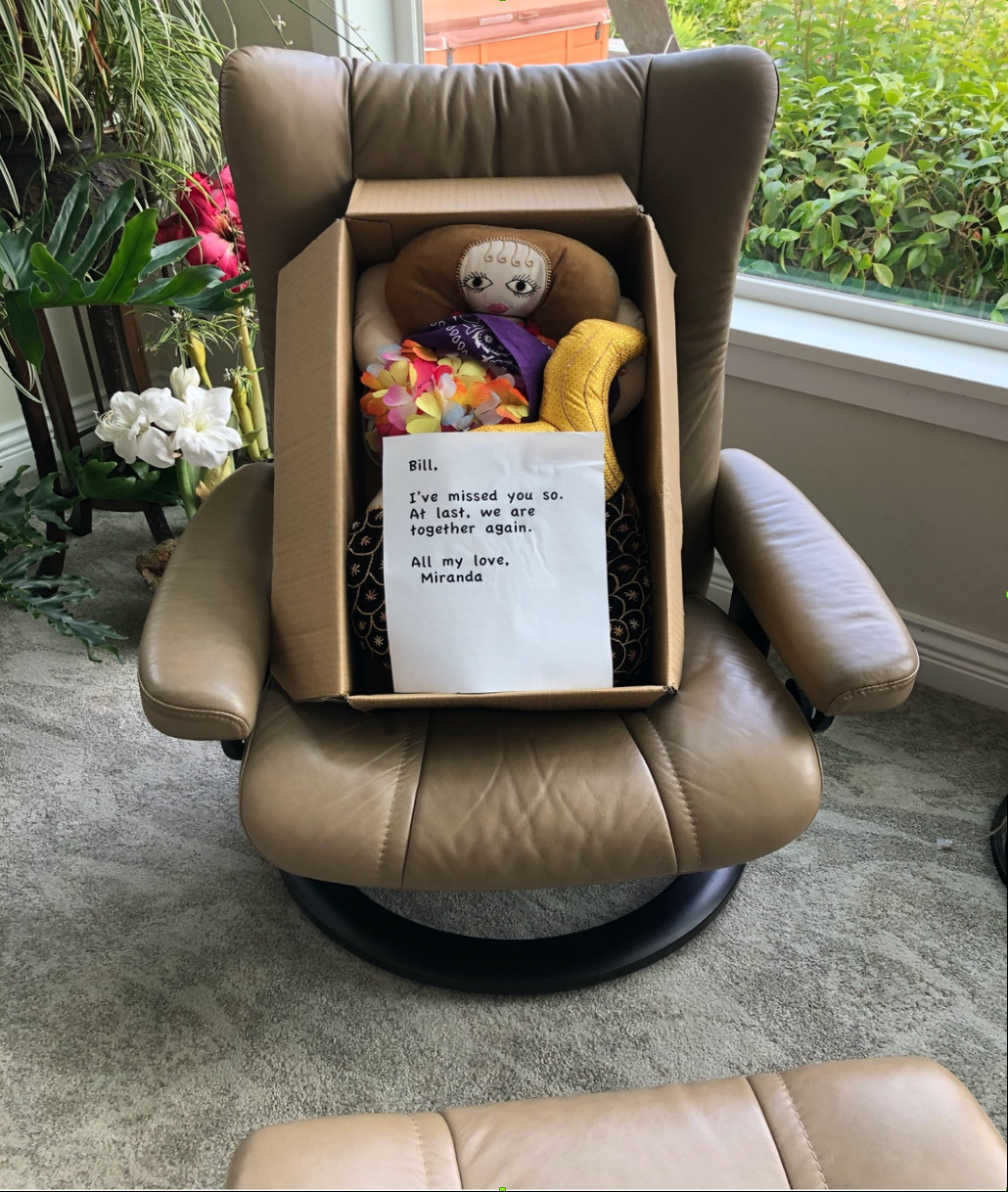 Bill was surprised and somewhat hesitant when he returned home, indicating face mask or not, there’s really no social distancing on the boat.

Personally, I like her. Miranda has many more social skills than our cat, she’s quiet, doesn’t eat a lot, doesn’t weigh a lot and seems more interested in life than Bandit (the cat). Who knows? We’ll see what happens when we go to Cap Sante Marina for the 4th of July weekend.

Well it was true. Miranda was much better behaved than the cat! Thus, Bill had a decision to make…would it be Bandit or Miranda and me on his future voyage(s)…Stay tuned to see what happened this summer.

It probably wasn’t fair that I didn’t tell you that the cat (Bandit) gets seasick, was it? As one can imagine, after multiple vet visits, multiple drugs, puncture wounds from trying to give those drugs, it was an easy decision for Bill to select Miranda and me as his crew.

Because this has been the summer of “The Backyard,” Miranda hasn’t been out on the boat much yet. She has had time to settle into Anacortes though, and get comfortable at home. 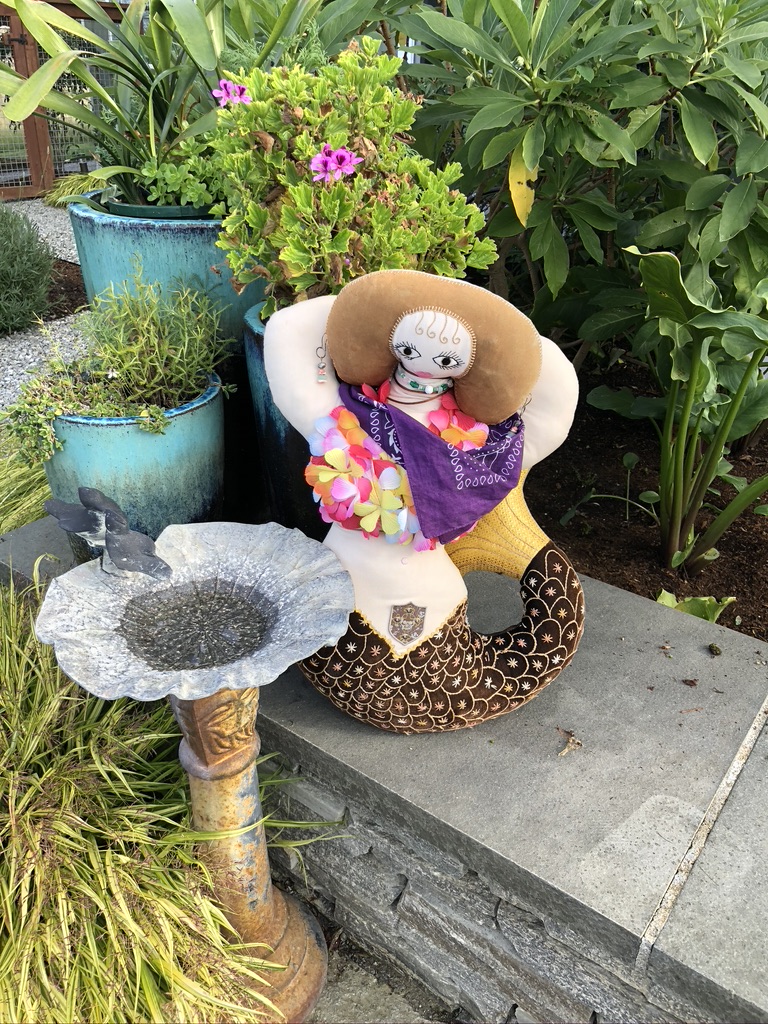 Next scheduled voyage for the Captain and crew was mid-September to Rosario and Deer Harbor. Let’s see, how did that go??? Well, really well, except for a bit of smoke and a lot of fog and the very first scratches on July (NT 42-110).

While moored in Deer Harbor, our slip mates came over a little too far when trying to dock, catching July’s starboard rear corner and removing the gelcoat down to the fiberglass. Miranda got a little excited about that…but Bill was able to get it fixed! Can’t even tell there was a problem.

Miranda did, however, make friends with another dock neighbor on the opposite side of us in his 62’ wooden boat, Orina. Turns out this neighbor is a published author of several books. One in particular he shared with Miranda and her crew, is titled Inside the Inside Passage – True Stories From the Land of the Spirit Bear, by Captain Joseph P. Bettis.

If you haven’t read the book, it is available on Amazon, and is a series of chapters not necessarily in date order, but all discussing Joseph’s adventures over thirty years with the magic and mystery of the Inside Passage. He takes you on a journey, all the way to Bartlett Cove & Reid Inlet, 1,272 miles from Seattle. Our own Vice-Commodore, Doug Ford said “…it is the best of the many cruising narratives I’ve read. Bettis did an excellent job of balancing people, places, history and a culture in a well-written narrative.”

Miranda’s next trip was to Rosario, where Miranda got some experience on the journey watching the radar with about a 1/8-mile visibility. The same foggy/smoky weather was repeated again 3 days later when we were moving on to Deer Harbor. We needed to go back so Miranda could wish her friend Joseph well, as he was moving his boat permanently to Friday Harbor. 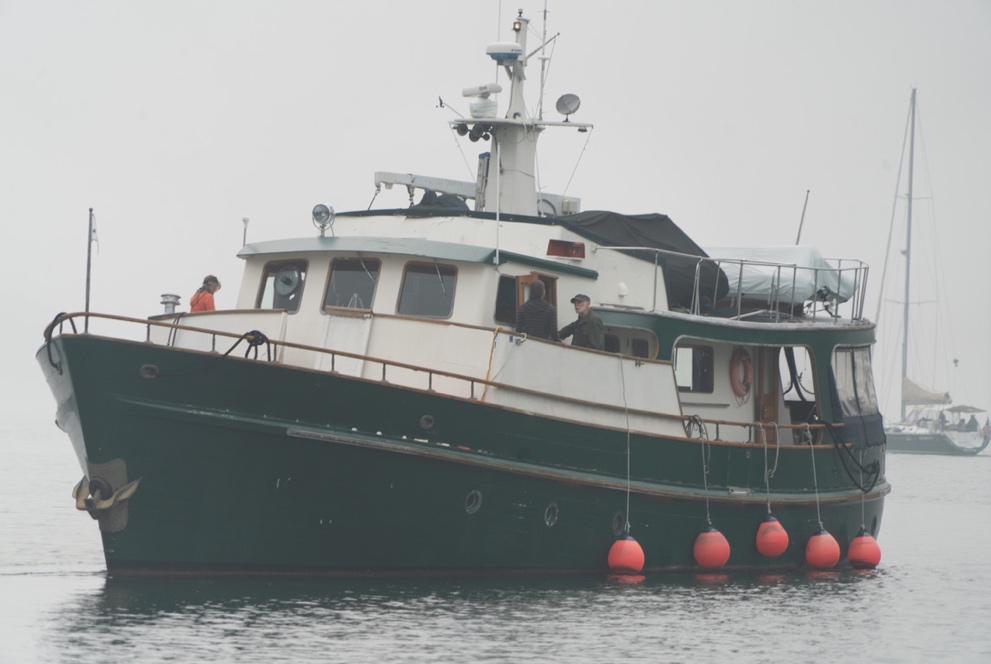 Things have been pretty quiet at home since then. Miranda helped can or freeze tomato and apple sauce(s), dry a few herbs, and generally start preparing the gardens for cooler days ahead. Miranda’s next couple trips will likely be Airbnb or VRBO related. We’ll keep you informed as to how and where she spends her holidays.

Until then…Miranda and Bandit (the seasick cat) play next to the fireplace on a cooler day. 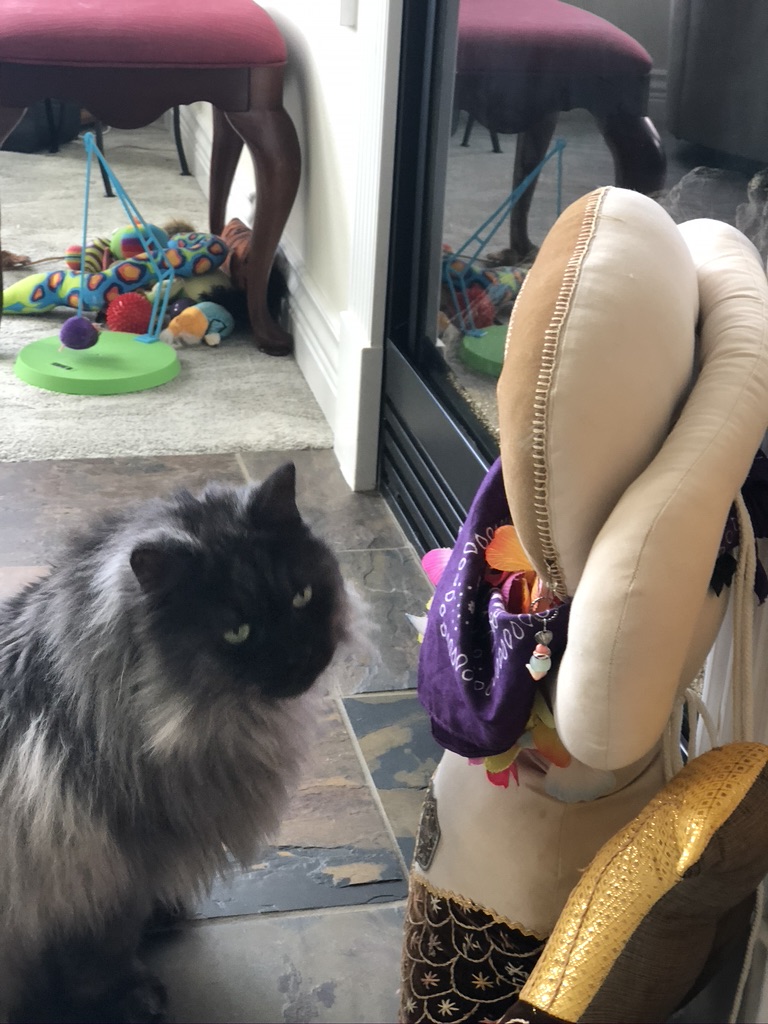