It all started on May 28th. That’s when Miranda started her most recent trip to the South Sound at Port Townsend, just off of Admiralty Inlet. 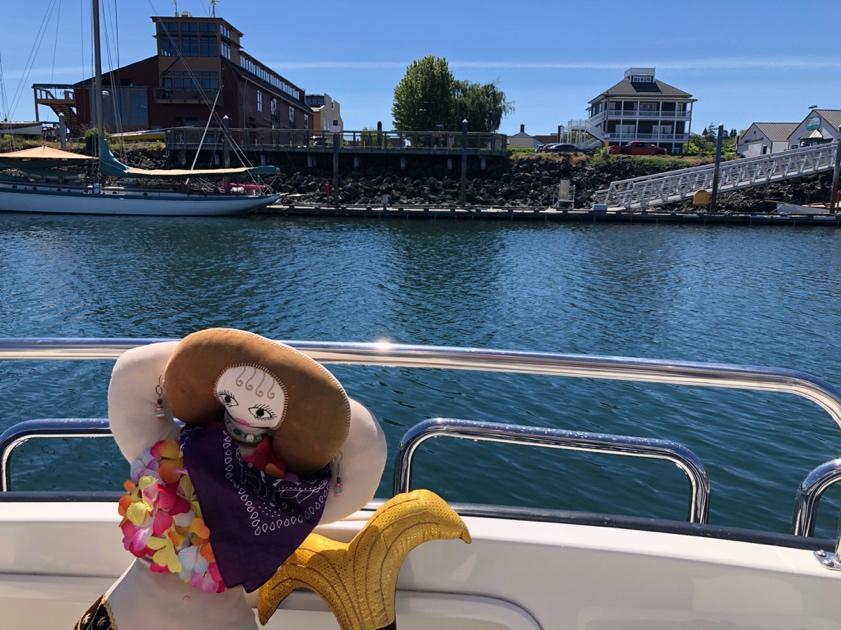 Miranda had never been to Port Hudson before and was excited to explore the waterfront and the town!

At that point however, she was still needing to wear her mask around others.

Port Ludlow followed, and was she excited to get outside and enjoy the scenery and short walks, a selfie with the totem pole and glance back toward July on the dock. 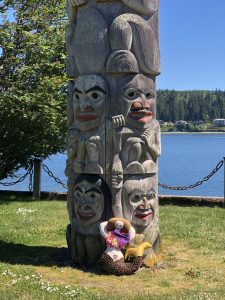 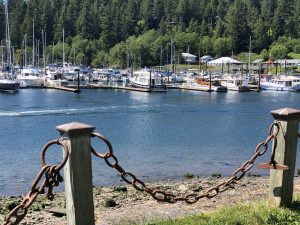 Things got more exciting as we moved on again to Kingston. Miranda spotted this lonely heron keeping an eye on his territory and the ferry as it came in… 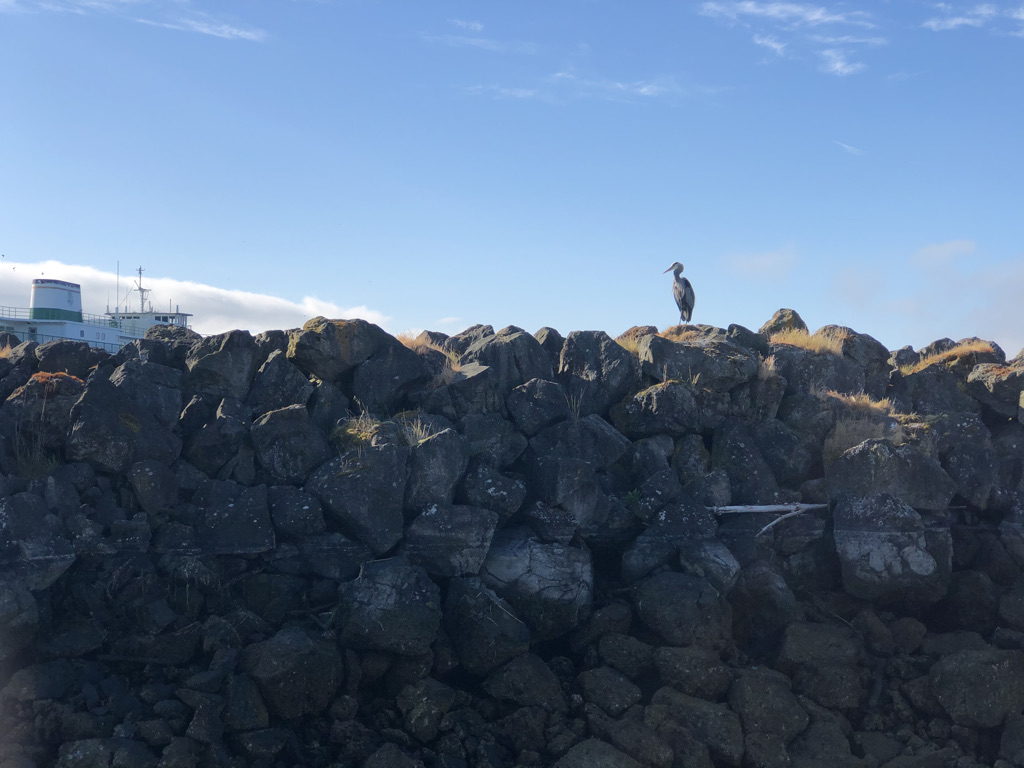 Hard to believe the heron followed us to Poulsbo, but Miranda was convinced when she saw a relative of the previous heron. There was no talking her out of it. 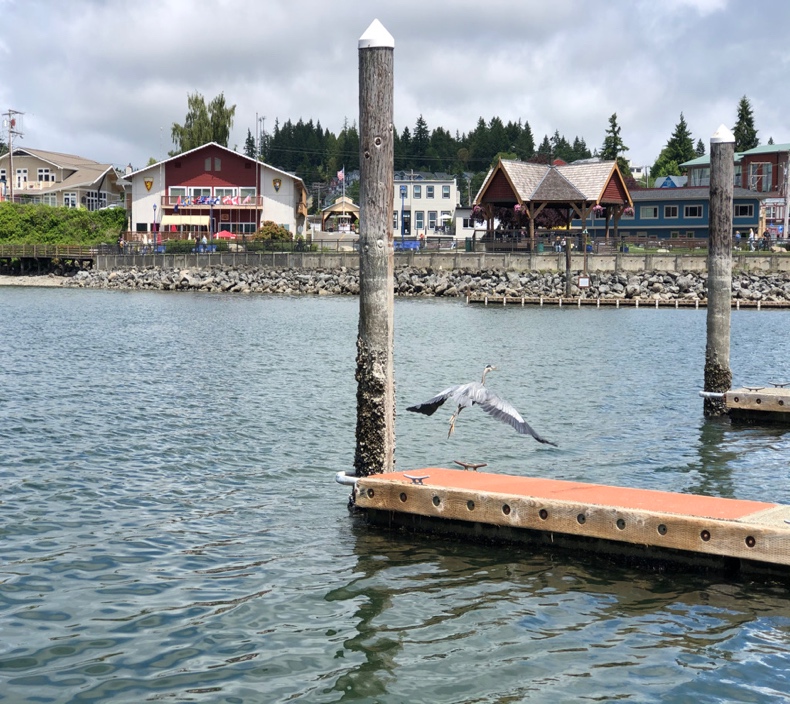 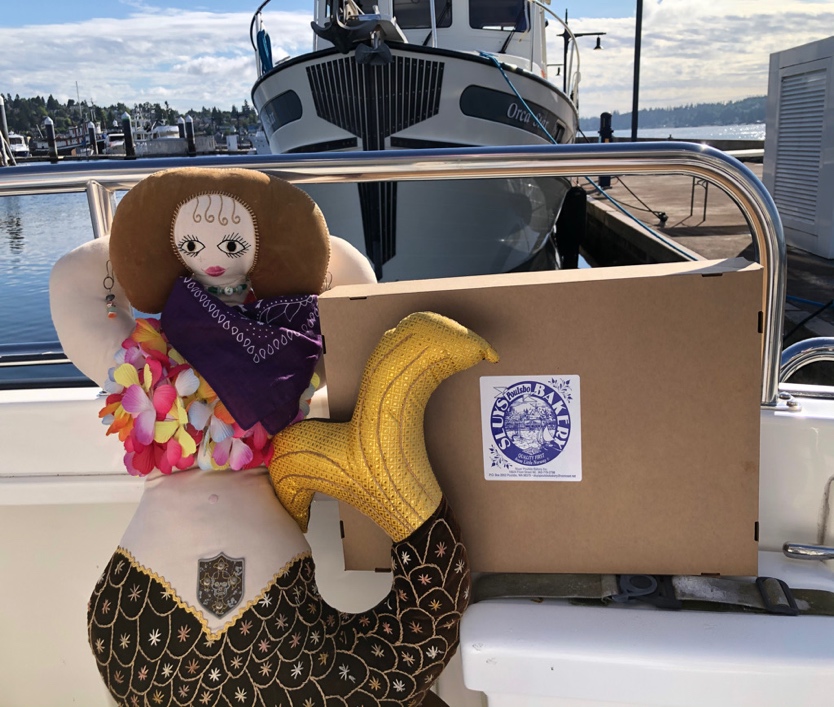 As it turned out, she was in Poulsbo for National Donut Day, Friday June 4th, and what a great place to be when the infamous Poulsbo bakery is just up the street! She even shared her special “find” with Jeri & Dave Starrett on Orca Star seen behind her. But then she got restless, which is a problem for Miranda…. 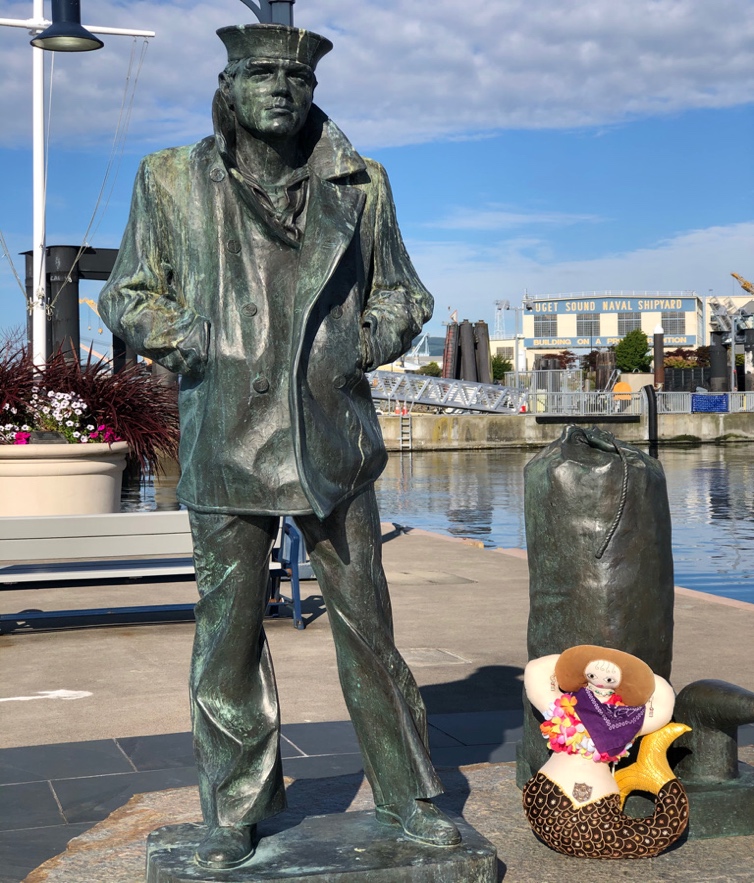 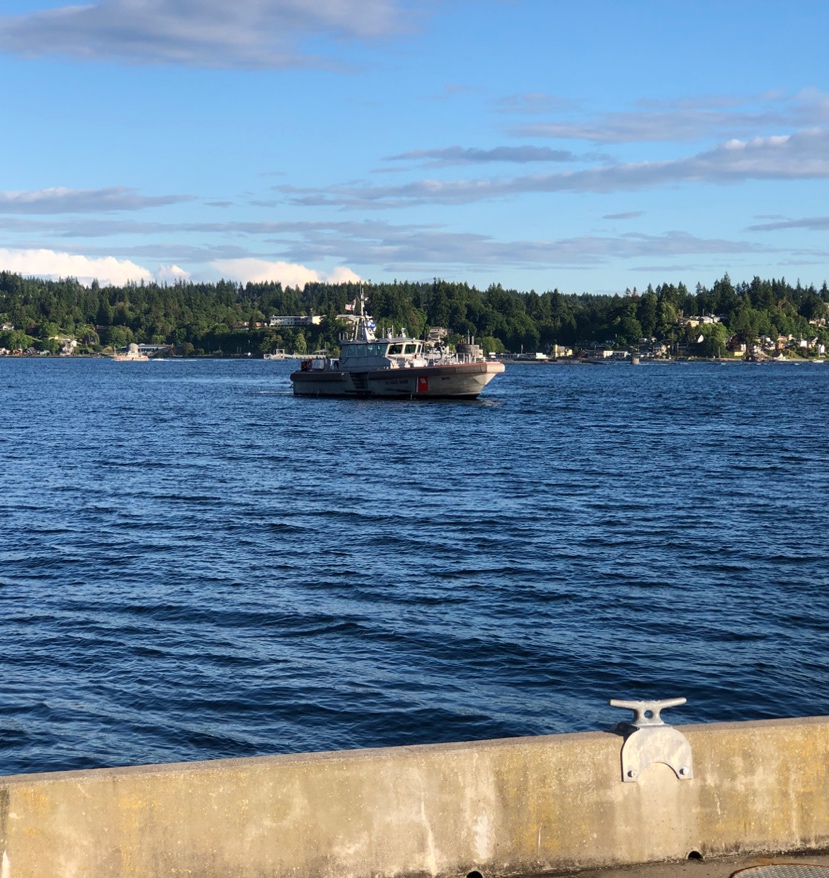 She tried to hook up with this sailor in Bremerton. Tried to sneak into his bag for the trip, but alas he sent her back to us on July. You see he was shipping out later that day on the submarine in the background…no mermaids allowed.

If you aren’t familiar with Miranda, she has quite a colorful past. You should look at her portfolio. She’s been to Alaska, the Broughton’s, the Intercoastal Waterway and all the way to Cuba. There have been a number of road trips too; places like Florida, California, Arizona and parts beyond. There are stories of police reports regarding disruption of the peace and other scandalous behavior.

Well, as the South Sound trip progressed, Miranda’s next destination was Dock Street Marina where she went frolicking at the Glass Museum with her previous caretakers, our PANNTOA Vice-Commodore & his wife, 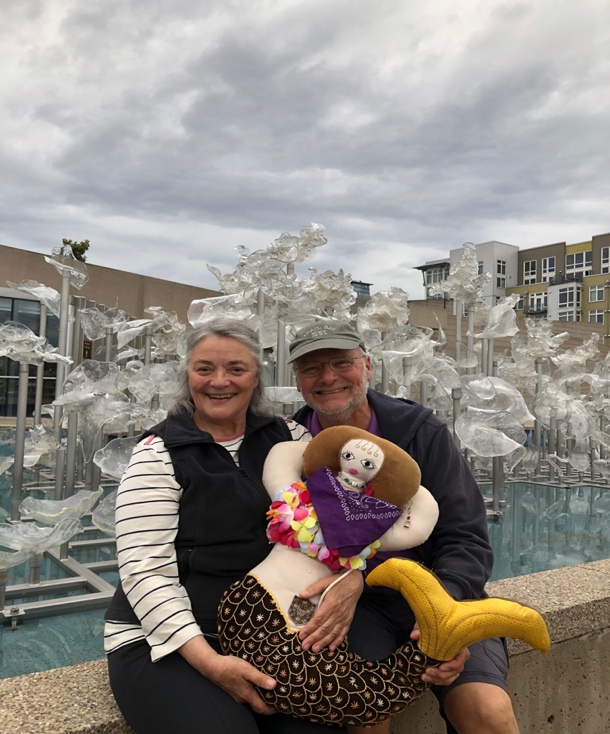 Lindsey and Doug Ford – What a sweet reunion!

They warned us Miranda had a taste for excitement. That played out as we went to Bell Harbor Marina, downtown Seattle. Miranda just HAD to go for a ride on the “Great Wheel”. Since Neither Bill nor I had been before either, we figured that would be a nice option for the afternoon with Miranda. 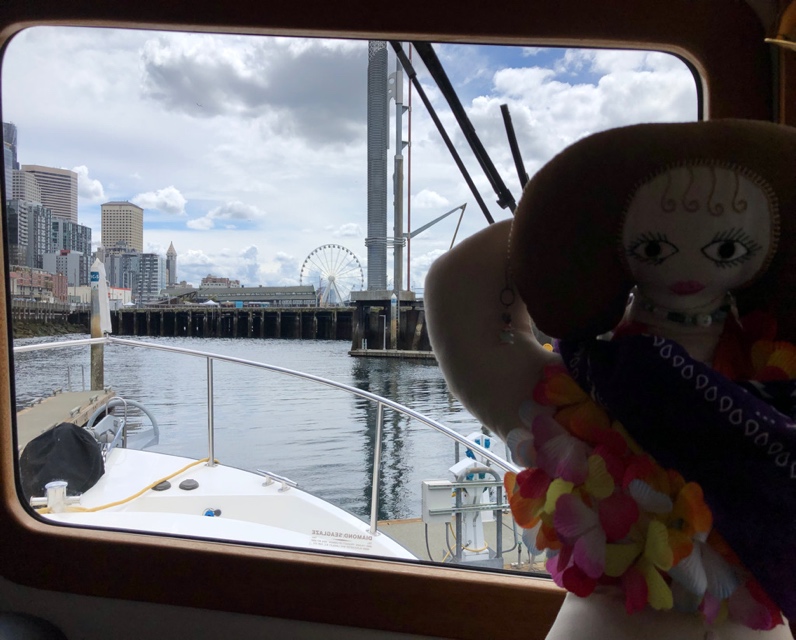 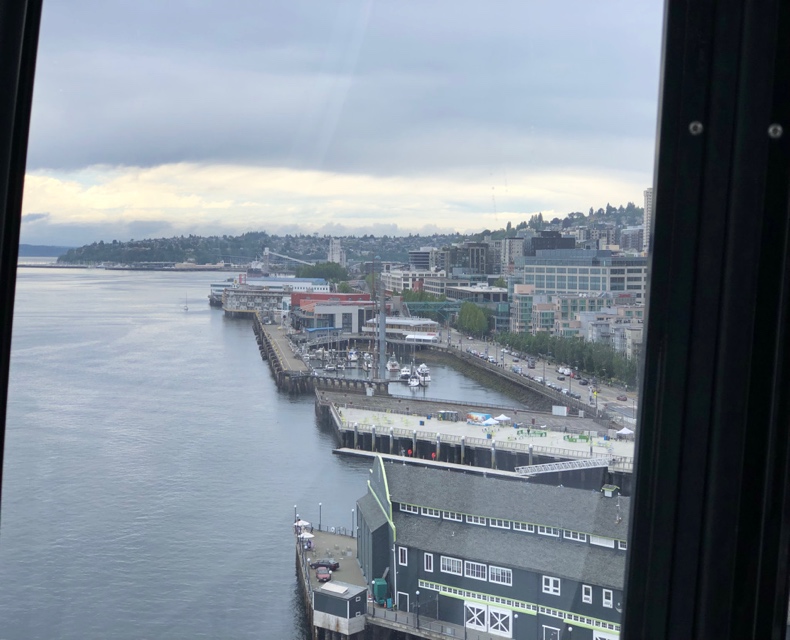 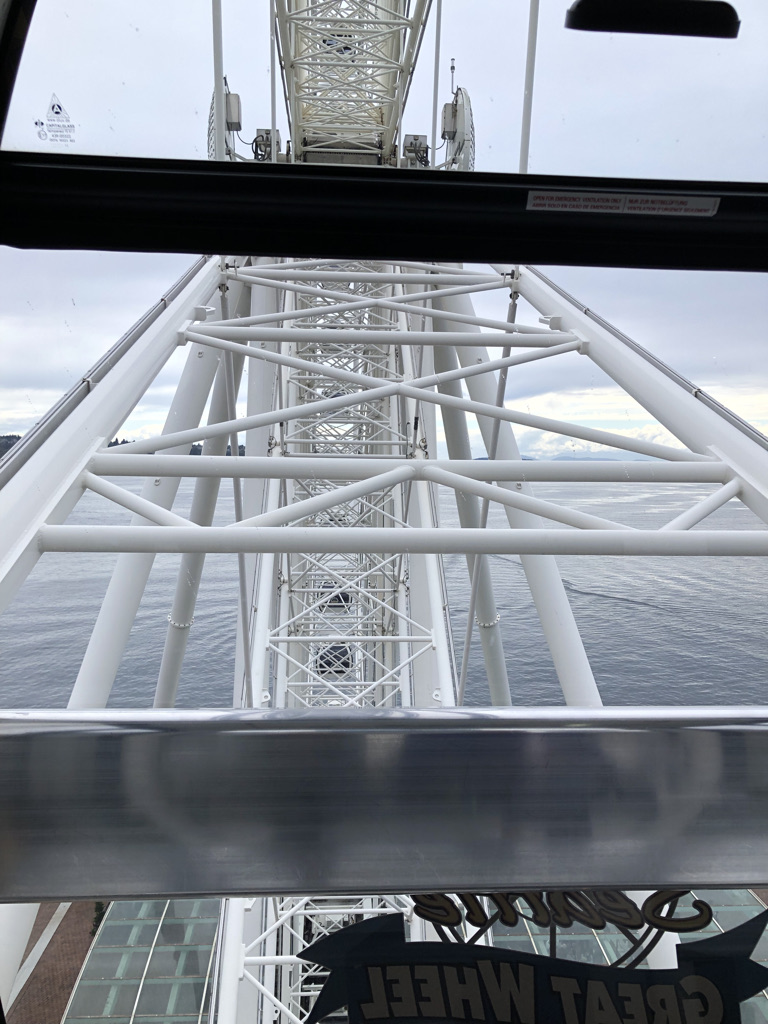 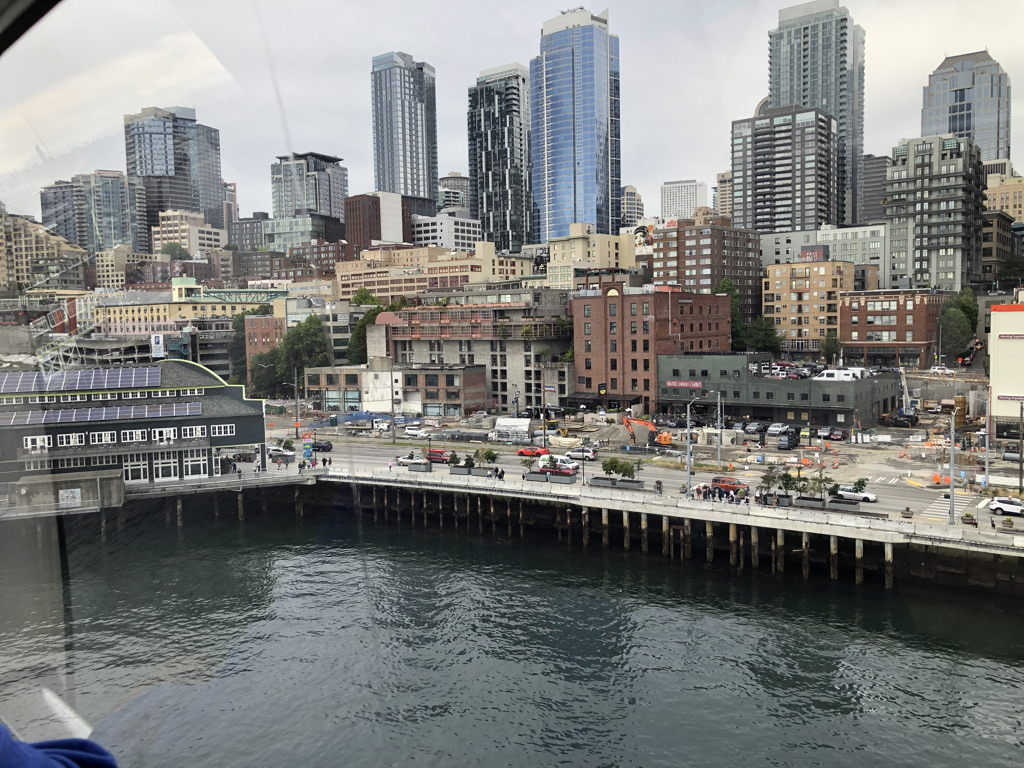 One of the last stops before heading back home was Everett. Miranda got so excited when she saw the kites, some even looking like her sea creature friends. She spent most of the afternoon watching. 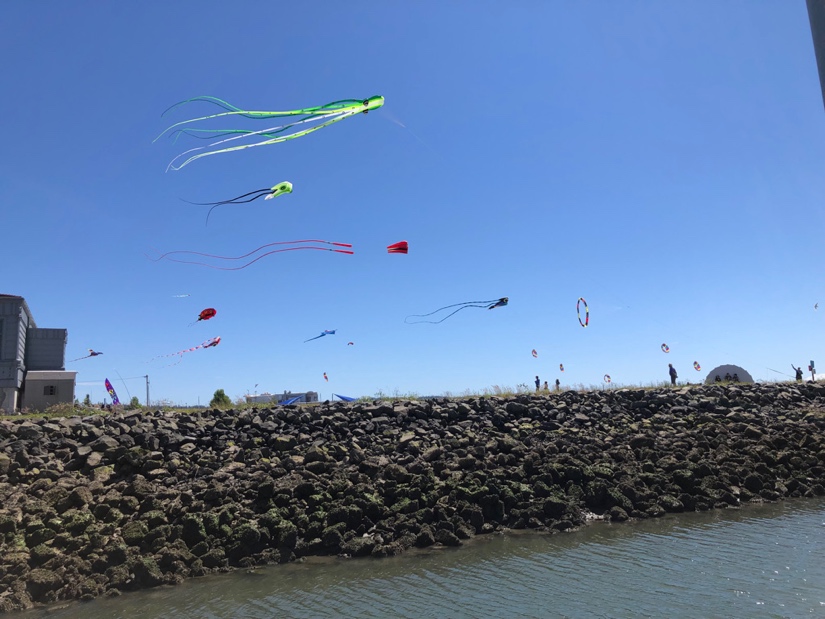 So, what is next for Miranda? Well while she did spend July 4th at Cap Sante Marina in Anacortes watching the fireworks, Miranda is looking for new hosts that will take her places she wants to revisit and new locations also.

If you are interested in hosting Miranda until the next Nordic Tug Rendezvous, please contact either Commodore Gary White at commodore@panntoa.com or Vice Commodore Doug Ford at vicecommodore@panntoa.com and they will connect you. If we don’t hear from willing candidates, it’s possible she may just hit the road and surprise you at your front door. Hard to say.

Wishing you all safe boating and a great summer!

Now is your time to explore the Southsound and meet fellow PaNNTOA members during 3 fun-filled days in Olympia.

Thursday – 4:00 pm Potluck. Bring your favorite dish to share with the group under the covered picnic area at the marina. Bring along your plate, utensils and BYOB.

Friday – 9:00 am Walk around Capital Lake. Join us for a nice gentle 4 mile walk to get the day started right. We will make a stop at Dancing Goat Espresso and the Farmers Market and then return to the marina around 11:00.

Friday – 2:00 pm Kayak trip to Priest Point Park. Launch your Kayak or dingy and join the group for this easy paddle adventure. If you don’t have a kayak, we may be able to borrow a few.

Friday – 2:00 pm Croquet Tournament. Has it been awhile since you’ve played croquet? No problem. We will draw for partners, teach you the game and have prizes for the winners.

Saturday – 9:00 am. Continental Breakfast on the docks provided by PaNNTOA.

I recently had a conversation with Dave Allen at the Nordic factory and he sent me pictures of the factory floor in full production. They are adding employees and are very busy. It’s nice to see the boats lining the production line.

There is a 44 that is just about complete and 3 40’s currently under construction. They have several others in queue. 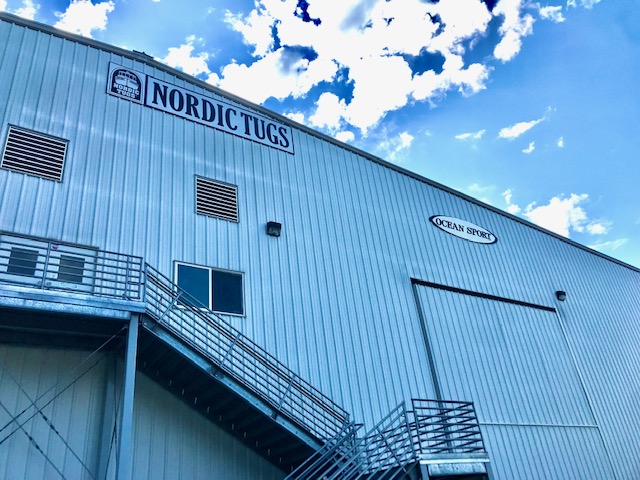 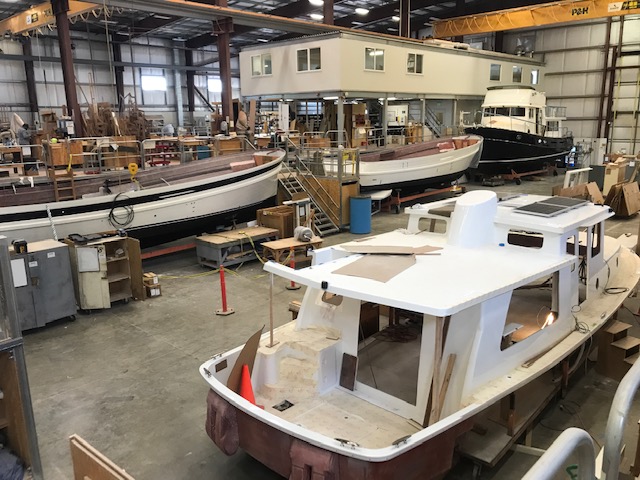 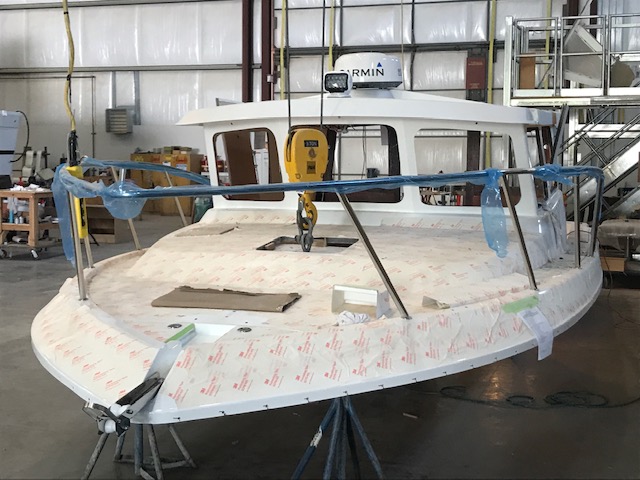 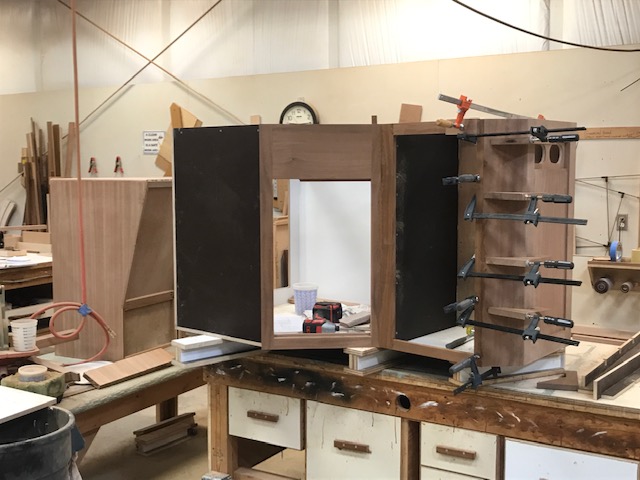 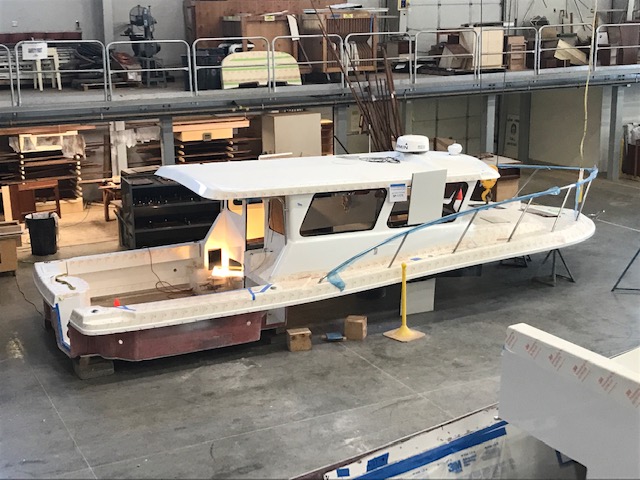 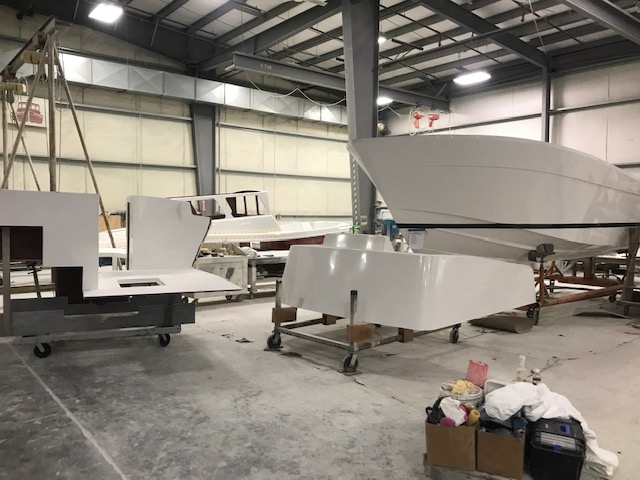