Our crack panel of judges, including Judge Amy Jamison from our generous contest sponsor, Seattle Yachts, is pleased to announce this year’s winners.

The Grand Prize goes to Mark Leopold and his 37’ Nordic Tug, “First Tracks.” 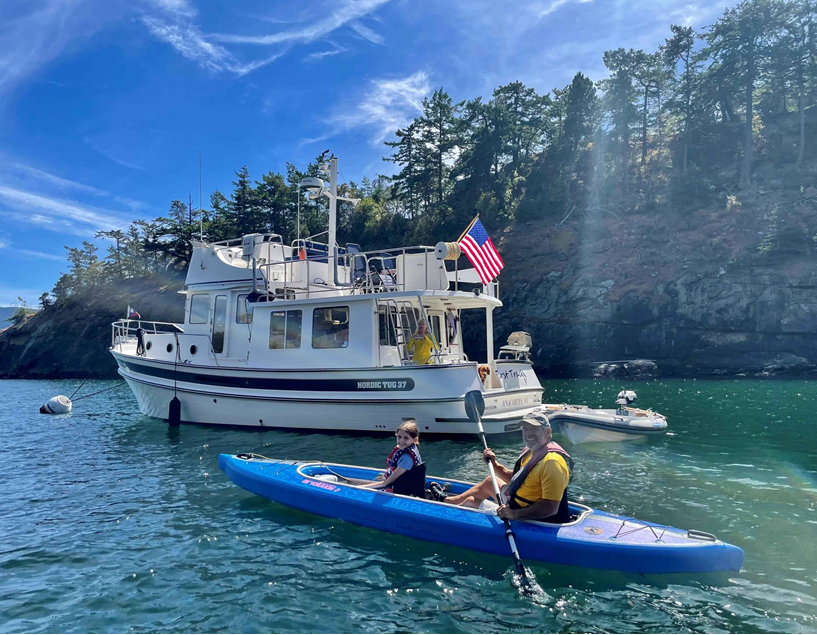 Mark wrote, “We love to use our Nordic Tug as our base and paddle by kayak to explore the many hiking trails that abound in the San Juan Islands.”

Snoring Bay is one of 6 different protected anchorages on Sucia Island, one of the most popular islands in the San Juan’s.  With COVID restrictions and not being able to cruise North to Canada or Alaska, Mark has enjoyed extensive exploration of the San Juans.  This past season, he anchored in all 6 different anchorages on Sucia, in addition to time spent at other favorite islands.  Snoring Bay is quite small, typically a two or three boat anchorage, as compared to other larger Sucia Island coves like Echo Bay, Fossil Bay, or Shallow Bay which typically see dozens or even up to a hundred vessels at anchor.  It is very cozy, quiet, and the perfect jumping off point to access many hiking trails.  In this photo, Mark’s dog Moxie anxiously awaits for his return. In the kayak is Mark’s granddaughter Harley. Mark says, “We love the spacious accommodations on the Nordic Tug that allows us to share new experiences with extended family.”

Congratulations Mark and thanks for sharing your photo. The Grand Prize is a ticket for two to the 2022 Vous in Sidney, BC.

First Runner-Up is this photo taken by John Hall on his 37’ Nordic Tug, “Flying Tiger.” John’s home port is in Whittier, Alaska, and this photo was taken this past summer in Prince William Sound. 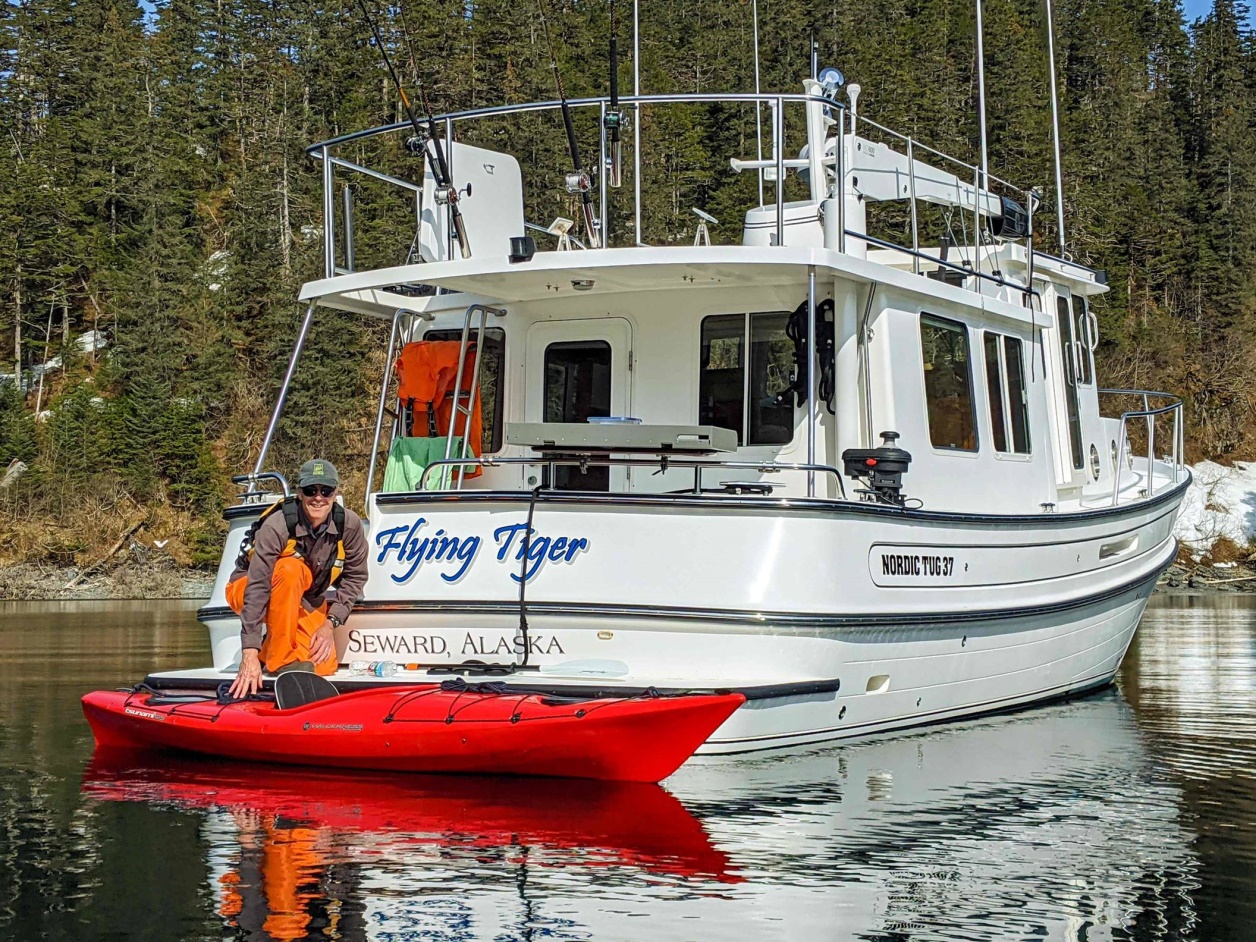 According to John, “Barbara and I took possession of our 2006 NT37 at Cap Sante Marina on May 31, the day before the start of the 2017 PaNNTOA Rendezvous. In the spring of 2018 we began the trip to bring the boat home to Alaska. After two and a half months of leisurely cruising up the Inside Passage, including two weeks in Glacier Bay National Park, we crossed the Gulf of Alaska and finally arrived in Prince William Sound. Prince William Sound is really a dream place to cruise; we have been cruising these waters since 2003 and there is still so much left to explore. We take full advantage of much of what the Sound offers – great fishing, shrimping, kayaking, beach combing, and hiking. The NT37 is our ideal “waterfront home,” whether for just the two of us, or even better, when joined by any of our grown children and their children.” According to John, Prince William Sound is truly a beautiful, remote, and delightfully undeveloped treasure. If you venture up here, be prepared to fall in love.

Second Runner-Up is this photo taken by Jeff Morris on “Adventure-Us.” 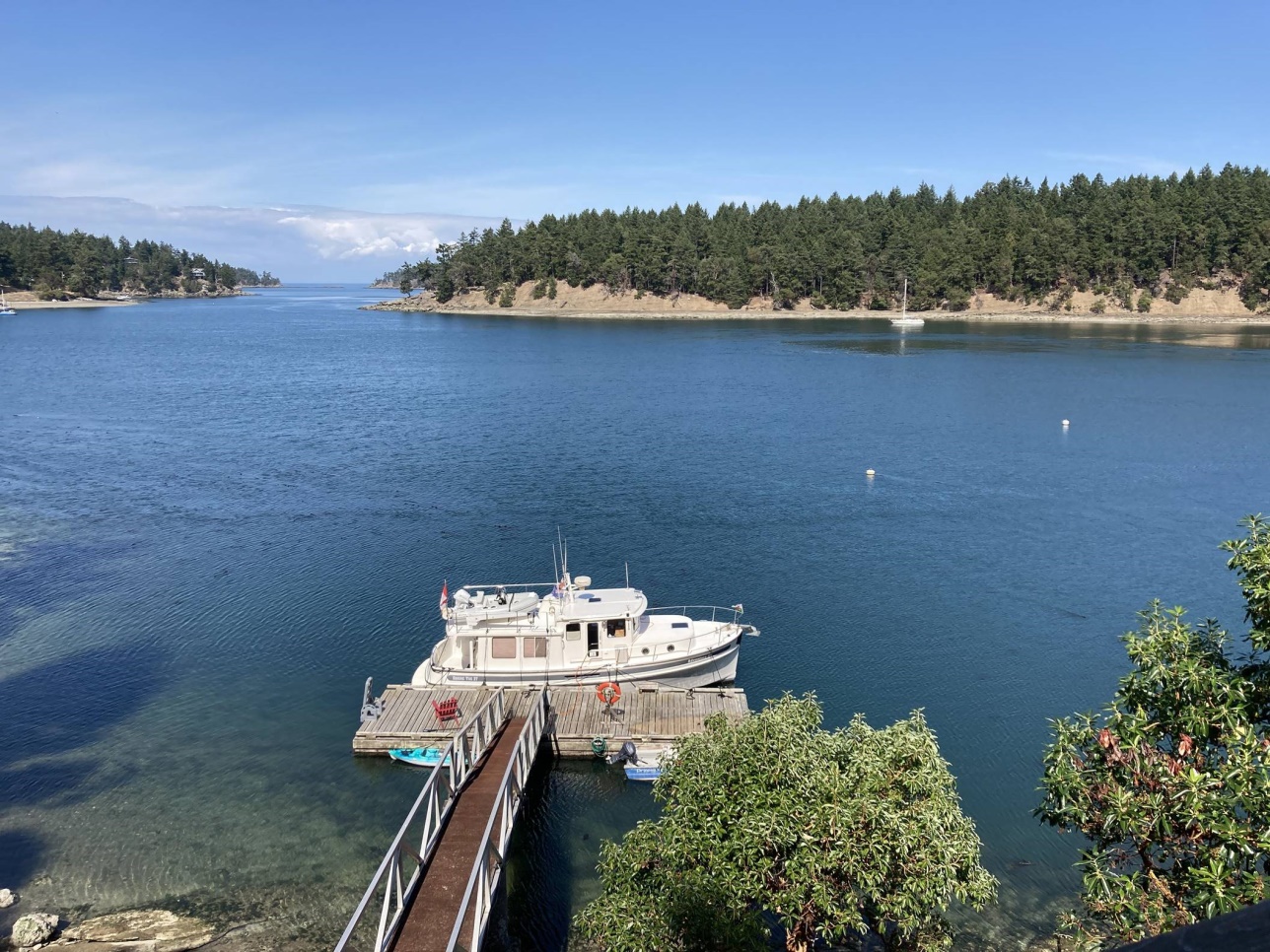 Jeff Morris and first mate Kate got their Nordic Tug 37 Single Cabin new in 2006—and every summer they just move aboard.  “Typically we meander for six weeks in the Gulf Islands and Victoria, and then head north for six weeks in Desolation Sound and beyond, but we’ve also cruised from Olympia to Port MacNeil, and around the outside of Vancouver Island to Tofino.   Our Nordic Tug is the perfect cruising boat for us, especially as the single cabin version has two freezers and a fridge!  Our two folding bikes fit down in the lazarette, and our dinghy nestles topside.  We’re honored to have been the start/committee boat for the last four Victoria to Maui Yacht races.”

John and Jeff will both receive $150 gift certificates to West Marine complements of our sponsor, Seattle Yachts.

The judges had a tough job because all the photos submitted were good examples of tug life, having good local fun and show how great it is to be in the Pacific Northwest. The judges want to thank everyone who submitted photos. And remember, it is not too early to start shooting your tug adventures for next year’s contest!